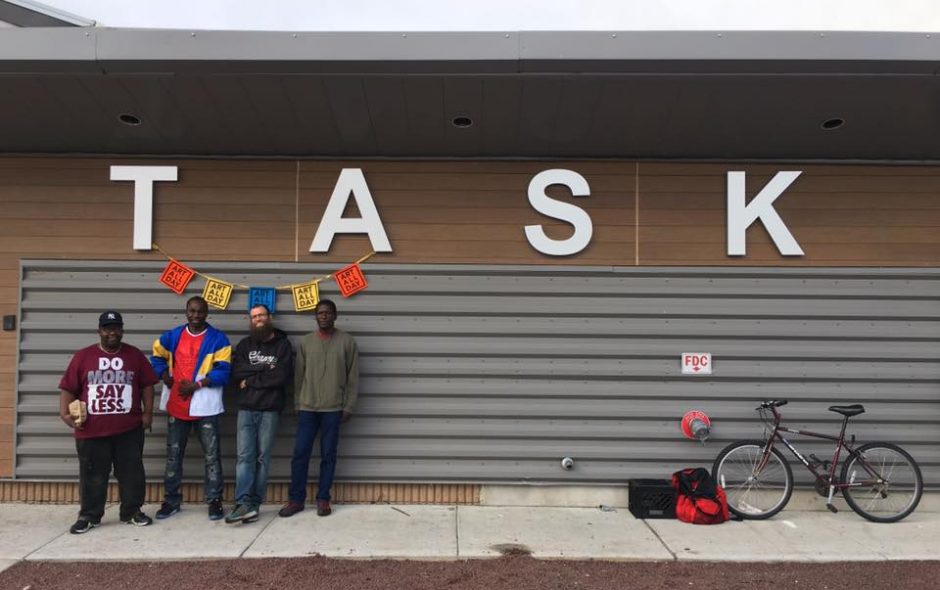 TASK has always relied on a network of organizations throughout the region to help it get patrons whatever they need. The soup kitchen has over 200 partnerships and in the wake of the COVID-19 pandemic those relationships have never been more important to literally keeping food on the table and services up and running for the thousands of people TASK serves.

From the day the soup kitchen suspended the use of its dining room to help stem the spread of the virus, TASK staffers have revved up their efforts, finding alternate ways of doing their jobs by calling on that collaborative network. It’s an effective and successful symbiotic relationship that enables TASK to obtain everything from birth certificates to health care and housing for existing patrons and the growing number of people who find themselves in need of services as the economic and social effects of the pandemic continue to unravel.

“A while ago one of our board members said TASK is the triumph of community – the result of people working in partnership for the good of the whole –  that is especially evident right now,” said TASK Executive Director Joyce Campbell. “We are seeing proof in so many ways that when we come together and work toward a particular goal – good things can happen, and we can truly help the people who need us most.”

Since the pandemic, TASK has strengthened existing partnerships, adding new ventures to old relationships like TASK’s long-time connection with the City of Trenton. It’s no wonder the city’s Director of Social Work Services Ruth Carter didn’t think twice about asking the soup kitchen to help with feeding home-bound seniors shortly after the pandemic restrictions were imposed in March. Carter has worked for the city for 43 years, so she was around when TASK was formed in 1982 and knows what the soup kitchen is about, she said. Carter added that “anytime the city needed meals, socks, underwear, hygiene bags – for anyone, for any reason, the city called on TASK,” and this time, was no different. The TASK-Trenton partnership is currently providing more than 650 meals daily to seniors living in city housing. TASK prepares the meals and city workers deliver the food.

“I just can’t say enough good things,” Carter said. “Having TASK as a partner has helped a great deal. This COVID thing has been disastrous and wreaked havoc on so many lives. Seniors with existing conditions didn’t feel safe to go out and those who ended up quarantined were stuck with whatever food or supplies they had in the house; and they don’t have the money to have food delivered. TASK provides them a hot nutritious meal and the food is good.”

TASK is also working with the city to provide meals to the homeless who are being sheltered while they recover from the virus. Paul Jensen, TASK’s kitchen and facilities manager, said this city partnership began at the end of April and provides three meals-a-day for more than 20 people. Later this summer TASK will embark on another project with the city, feeding families who have children enrolled in the National School Lunch Program. And, just this week the soup kitchen began another new partnership with the Hamilton Township school district, offering families free meals from local restaurants. Jensen said as the pandemic continues, need is growing in both the city and the suburbs.

“These are important collaborations that are feeding more people and fulfilling a need,” he said, adding that this type of enterprise provides relief for a kitchen staff juggling an increased demand for meals from new patrons as well as other collaborations like the one with HomeFront. Homefront began delivering  meals to individuals and families, who had been placed in local motels because they had COVID-19 or were exposed to it, and had no place to quarantine. TASK is providing over 100 meals a week to this project. Combined, these TASK collaborations have resulted in a 70-percent increase in food production over the previous year, and a 33-percent rise since the pandemic shutdowns”, Jensen said.

In addition to feeding more people with the help of extra resources, TASK is doing the same with the vital services patrons need to achieve self-sufficiency. Housing, health care, and identification are a few of the key areas where the partners team up often, said TASK Senior Case Manager Julie Janis.

“You can be the most organized and dedicated person out there, but if there is no one there to make connections with – to help you make things happen – next to nothing is going to happen,” said Janis. “I’m so thankful that Mercer County is great at working collaboratively. I think we have a good group of people with good attitudes and that allows collaboration to really shine here.”

Among others, TASK works with the Rescue Mission of Trenton, the Trenton Health Team, the Mercer County Board of Social Services (MCBOSS), and the city’s the Coordinated Entry Assessment System (CEAS) Center which houses the homeless. Carter’s division is also on the list. She said she and Janis work together a lot – especially on birth certificates – an absolute must for getting patron’s legal identification and just about anything else.

“We help Julie get the birth certificates she needs and she helps us with getting out-of-state birth certificates which are harder to get,” Carter said, adding that for other matters, the two “just pick each other brains until we figure it all out.”